There are three sections in this chapter, each prefaced by “the word of the Lord came to me” (22:1; 22:17; 22:23). In the first one Ezekiel is invited to judge Jerusalem, or asked if he will, with expected answer being that he should. Now an awful lot of nonsense is talked about “not judging others”. Infact, when someone ways this you can be pretty sure that the next thing they say will be utter nonsense. Usually it is quoted as an excuse for saying “don’t tell me I am sinning”. Here Ezekiel is told to confront Jerusalem with “all her detestable practices”. If we read the gospels and Acts those who are spoken well of are people who know they are sinners, and all the preaching either states explicitly that the hearers are sinners, or assumes that they are. We have a great, and unhelpful, reluctance to do this today, so not wanting to offend anyone.

James 2:8,9 - Love your neighbour as yourself

When asked what the greatest commandment was Jesus named two. The first was to love the Lord our God with all our heart, mind and strength. The second was like it, and was to love our neighbour as ourselves. James quotes the second one here. These two commandments come from the Law, and show that the Law does not become irrelevant with the gospel. Indeed, you can only believe that it does by ignoring the New Testament and turning off your brain, though there are some who seem to manage this feat! This also shows that the Jews were not all blind legalists, they were aware of the principles in the Law as well. Here James urges us to follow the primary principle about loving our neighbour.

The reason all these things were going to happen was the sin of Israel and Judah. “Your transgressions are uncovered”, “you have come to remembrance”. Did God not know about their sins beforehand? Of course He did! But the effect of sins, especially the long term effects, are not always immediately apparent. And God is incredibly patient with our sin, wanting us to come to repentance. Sadly we so often do not repent.

The Ammonites may have thought that they had escaped. Remember that there had been a fork in the road (21:21). Ammo had joined in with Babylon in the attacks on Judah, and she may have been feeling smug and secure. God is saying that she too will suffer the wrath of God, and in her own land (“your blood shall be in the midst of the land”). Earlier in Ezekiel we had the chapter on a man dying for his own sins. The same applies to nations. We are always prone to look at others. We need first of all to look at ourselves. We need to deal with our own guilt. Someone else’s guilt does not benefit us!

In Romans 12 Paul talks about being transformed by the renewal of our minds, and we get an example of that here. The world has its way of “choosing” people, its own standards by which it judges things, and its own ways of thinking. God’s ways are very different, and we need to adapt to this. God has chosen those who “are poor in the eyes of the world”. This does not mean the rich cannot be saved, but it does mean that there are no grounds at all for despising the poor. And the poor who love God will inherit the kingdom. This is God’s choice!

But we are always in danger of dishonouring the poor, for it is so much a way of life in the world. Moreover, it makes no sense for the church to do this. For it is the wealthy and the “elite” who despise and exploit the church. Even more seriously, they insult the name of the Lord, the one to whom we belong. So in the world’s eyes valuing the poor does not make much sense, but in the kingdom it is actually the most sensible thing to do!

We now get more dramatisation. Ezekiel is to clap his hands and bring the sword down three times. This is to stress that this will be a  complete destruction of Jerusalem. Again, this is not a warning, God is not playing about. Many will die (“a sword for great slaughter”), and hearts will melt. Every gate of the city has a sword assigned to it, there is no escape, so safe places. “I will satisfy my fury”. Is God like this? Yes He is, for He knows the incredible damage that has been done by Judah’s sin. The damage is not just the direct sins committed, it is the blessing that has not come to the surrounding nations because Israel rebelled against God. We are meant to influence the nations, not the nations influencing the church.

Generals would often cast lots when a decision had to be made. This is what the arrows, teraphim and liver are referring to. “Examining the entrails”. During the invasion there would come a point where the Babylonian army would stop and decide whether to invade Jerusalem, or Ammon. Lots would be cast and Jerusalem would be the chosen target, but some would think this was surely a mistake. However, it is God who is in control, and He has decided that it is time for judgement on Jerusalem, so the Babylonians would attack Jerusalem. It may seem to the observer that decisions are made either by Babylon or by pure chance, but in reality it is the Lord’s decisions that are being fulfilled. Even the casting of lots is in the Lord’s hands (Prov 16:33).

James now moves on to favouritism. Peter also noted that God does not show favouritism. “Believers in our glorious Lord Jesus Christ”. This is a large part of the reason why we should not show favouritism, or perhaps better why showing favourtism is mind numbingly stupid. We belong to our “glorious Lord Jesus Christ'', we have been saved by Him, we are loved by Him, we are co-heirs with Him. On a purely selfish basis what do you think you can possibly gain by showing favouritism to a mere man, no matter how important he might seem to be in the world?

James then gives a practical example of what happens. Suppose a poor man and a rich man come into the church. The natural inclination is to show favour to the rich man because we think he is important, but to ignore or treat the poor man as less important, the poor man. If we do this we have “become judges with evil thoughts”. Both were created by the same God in the image of the same God. Christ has died for both of them. They are of equal importance and value, and worthy of equal honour because of Christ. We find our own identity in Christ, and we give equal worth to both because of Christ. If we do otherwise we are not acting in a Christlike manner.

The severity and certainty of the coming judgement is emphasised by God stressing that the sword has been polished and sharpened. God has made meticulous preparations for the victory of Babylon over Judah. As I have said before, there was a deeply ingrained belief that God would never allow Jerusalem to be conquered. This belief needed to be shattered. The earlier invasion by Assyria should have convinced them of that, but we can be incredibly stupid.

“Cry out and wail”. Ezekiel is to do this to demonstrate that he certainly believes what God is saying, and the attack, by God, will be against His people and His princes. It should not be like this, but the repeated sin of Israel made it inevitable. People object to the idea of hell, and they are right in one sense in saying that people should not be going to hell. But this horrible truth has come about because of our sin. The problem does not lie with God, it lies with us, with you and me. “For it will not be a testing”. This is not a training exercise, it is not a mere rebuke, it is a final judgement!

Living by Revelation, Faith and Promise 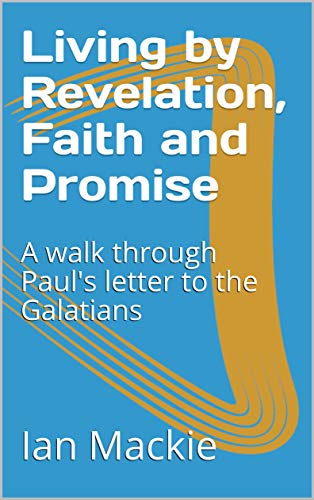 My name is Ian Mackie and I go to the Gate Church International in Dundee, Scotland. However, I must stress that anything I say in these notes is entirely my responsibility.

By the way, do not be misled by the publication time of the postings. They are usually written several weeks in advance (currently over three months in advance), and set to be posted automatically at sometime in the early morning. While I am a morning person, I do not get up a 4am in the morning to write this stuff!
You can find some complete sets of notes on various books here.
Listen to sermons.